Drywall (also known as plasterboard, wallboard, gypsum board) is a panel made of gypsum plaster pressed between two thick sheets of paper. It is used to make interior walls and ceilings.[1] Construction became prevalent as a speedier alternative to traditional lath and plaster.[2]

In many places, the product is sold under the trademarks Sheetrock,[3] Gyproc.[4][5][6] In the United Kingdom, Australia and New Zealand the category is known as plasterboard and proprietary brands include Gib®. 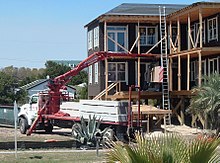 Drywall is delivered to a building site on a flatbed truck and unloaded with a forked material handler crane. The bulk sheets are unloaded directly to upper floors via a window or exterior doorway.

As an alternative to a week-long plaster application, an entire house can be drywalled in one or two days by two experienced drywallers, and drywall is easy enough to use that it can be installed by many amateur home carpenters. In large-scale commercial construction, the work of installing and finishing is often split between the drywall mechanics, or hangers, who install the wallboard, and thetapers and mudmen, or float crew, who finish the joints and cover the fastener heads with drywall compound. Dry wall can be either finished level 4 or in high end applications can be treated with a level 5 finish. Depending on how significant the finish is to the customer the extra step in the finish may or may not be necessary.

Drywall screws are designed to be self-tapping.

Drywall is cut to size, using a large T-square, by scoring the paper on the finished side (usually white) with a utility knife, breaking the sheet along the cut, and cutting the paper backing. Small features such as holes for outlets and light switches are usually cut using a keyhole saw or a small high-speed bit in a rotary tool. It is then fixed to the wall structure with nails, glue, or more commonly in recent years, the now-ubiquitous screws.

Drywall fasteners, also referred to as clips or stops, are gaining popularity in both residential and commercial construction. Drywall fasteners are used for supporting interior corners and replacing the non-structural wood or metal blocking that traditionally was used to install drywall. Their function serves to save on material and labour expenses, to minimize call-backs due to truss uplift, to increase energy efficiency, and to make plumbing and electrical installation simpler.

Screw heads have a curved taper, which allows them to self-pilot and install rapidly without having to be punched through the paper cover. When finished driving, these screws are recessed slightly into the drywall. Screws for light-gauge steel framing have an acute point and finely spaced threads. If the steel framing is heavier than 20-gauge, self-tapping screws with finely spaced threads must be used. In some applications, the drywall may be attached to the wall withadhesives.

After the sheets are secured to the wall studs or ceiling joists, the installer conceals the seams between sheets with joint tape and several layers of joint compound (sometimes called mud). This compound is also applied to any screw holes or defects. The compound is allowed to air dry then typically sanded smooth before painting. Alternatively, for a better finish, the entire wall may be given askim coat, a thin layer (about 1 mm or 1/16 inch) of finishing compound, to minimize the visual differences between the paper and mudded areas after painting.

Another similar skim coating is always done in a process called veneer plastering, although it is done slightly thicker (about 2 mm or 1/8 inch). Veneering uses a slightly different specialized setting compound (“finish plaster”) that contains gypsum and lime putty. This application uses blueboard, which has special treated paper to accelerate the setting of the gypsum plaster component. This setting has far less shrinkage than the air-dry compounds normally used in drywall, so it only requires one coat. Blueboard also has square edges rather than the tapered-edge drywall boards. The tapered drywall boards are used to countersink the tape in taped jointing whereas the tape in veneer plastering is buried beneath a level surface. One coat veneer plaster over dry board is an intermediate style step between full multi-coat “wet” plaster and the limited joint-treatment-only given “dry” wall.

The method of installation and type of drywall can reduce sound transmission through walls and ceilings. Several builders’ books state that thicker drywall reduces sound transmission, but engineering manuals recommend using multiple layers of drywall, sometimes of different thicknesses and glued together, or special types of drywall designed to reduce noise.[20] Also important are the construction details of the framing with steel studs, wider stud spacing, double studding, insulation, and other details reducing sound transmission. Sound transmission class (STC) ratings can be increased from 33 for an ordinary stud-wall to as high as 59 with double 1/2″ drywall on both sides of a wood stud wall with resilient channels on one side and fiberglass batt insulation between the studs.[21]